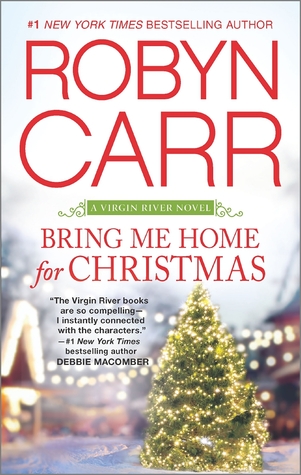 This year, Becca Timm knows the number one item on her Christmas wish list—getting over Denny Cutler. Three years ago Denny broke her heart before heading off to war. It's time she got over her silly college relationship and moved on.

So she takes matters into her own hands and heads up to Virgin River, the rugged little mountain town that Denny calls home, as an uninvited guest on her brother's men-only hunting weekend. But when an accident turns her impromptu visit into an extended stay, Becca finds herself stranded in Virgin River. With Denny. In very close quarters.

As the power of Christmas envelops the little town, Becca discovers that the boy she once loved has become a strong and confident man. And the most delicious Christmas present she can imagine.


There really isn't anything like returning to Virgin River after a long break in reading the series. I know that Robyn Carr has her Thunderpoint series now but I've been slowly reading this series in an effort to put off the inevitable. I just love the warmth that these books exude and I always feel like I'm settling in with old friends when I read the series.

This one, is probably my favourite out of the Christmas novels in the series up until this point. Maybe it's because I'd been away from the series for a long time or maybe it was just that Carr added a little more Christmas magic to it. Who knows, all I know is that I loved it and it put me in the holiday spirit right away. Mind you, at the time that I read the book it was mid August (I was a little early). But I loved it nonetheless.

This one featured one of my favourite themes- second chance romance and with two characters that I loved right from the start. Becca and Denny were just awesome together. They were a little younger than the last few couples in the book but I think that just made it even more important for them to reconnect because they could pick up right where they left off basically.

I thought Becca was a hoot as she basically forced herself into her brother's bachelor weekend to get closure from Denny who broke off there relationship a few years before. Instead it seemed like one thing got in her way after another and a broken ankle, some yelling and a little drama later from her and Denny she got the complete opposite of closure and ended up realizing she never stopped loving him. I really liked Becca, I thought her stubborn attitude was great. She may have been tiny but she was definitely not a wallflower or a pushover which was refreshing. She also had a great sense of humour and a big heart that definitely came through not only when she was with Denny, but when she was dealing with the people of Virgin River especially the children.

It was great to see Denny again. He'd been a side character in a couple of the previous Virgin River and we got to know him a little in those but it was nice to see him really shine as the main character in this romance. He knew he'd made a mistake in leaving Becca before and I was happy he wasn't hardheaded about coming around to that. He was so sweet and caring. He's one of those guys who would give you the shirt off his back literally if it meant that he could help. He was just so easy going I couldn't help but love him.

While their romance was a bit quick, due to Becca being trapped in Virgin River over the holidays it didn't feel rushed and I think it's because the usually band of merry characters from the series were in the story too. It was great to see Jack, Mel, Paige and Preacher again as well as some of the other minor characters and I loved the message that this book had about helping your community no matter what during the holidays everyone deserves to be warm and fed.

This was a cute, warm holiday read and one that really brightened up my day as it only took me the afternoon to read it, The romance between the two characters and the characters themselves felt genuinely authentic and filled me with Christmas cheer.

This is one that I would recommend to fans of the Virgin River series and to newcomers as well. If you really want a book that will make you feel cozy this is it especially if you love when two people get a second chance with each other.