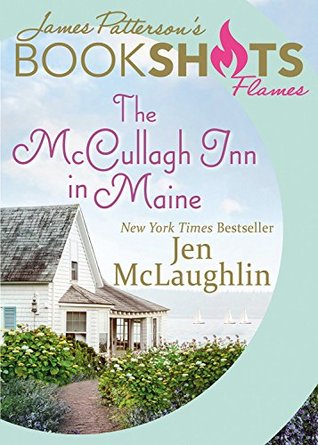 Her second chance at love. . .Chelsea McCullagh escapes to Maine with a gun and fresh bruises. She's ready to begin anew-until she runs into her old flame, Jeremy Holland. As he helps to fix her inn, her heart heals and they rediscover what they once loved about each other. But as the two play house, it starts to seem too good to last. . . .
Summary & Cover taken from Goodreads.com
Length: 137 pages (Paperback)
Available Formats: Print/E-Book/E-Audiobook/Audiobook CD
Source: Toronto Public Library
Publication Date: July 5th 2016 by BookShots

I picked this one up on a whim a couple weekends ago, after stumbling across it at my library and because I'm  a wee bit behind in my Goodreads Reading Challenge I thought this one would be a great quick read and give me a chance to try a new series and author.

I went into this one with high hopes. I love a good second chance love story, a suspenseful twist and a nice quite setting in a small town so I was hoping this one would maybe not be great, but really enjoyable. Unfortunately for me, this one just didn't do it for me.

I wasn't expecting the characters or the story itself to be exemplary given the short 137 page length of this little romance, however I wasn't prepared for just how little I would like Chelsea. She was rude, self centered and I found her inner dialogue to be really annoying and repetitive I didn't care for her attitude or the way she treated Jeremy or her brother for that matter. She kept pulling the woe is me card and I couldn't really find anything redeemable about her.

Jeremy on the other hand was the one saving grace of the book. I thought he was very sweet and I wish he'd played a larger role. Yes he was the hero of the story and I'm glad that he was able to reunite with Chelsea, but I just couldn't help but want to scream at him to run far away from her and he seemed to be used more as a prop than a character in his own right.

The story revolving around Chelsea's escape from Miami and sudden reappearance in Maine wasn't fleshed out enough for me either. To me it read as if the author was just cutting and pasting storyboard ideas without fully integrating them into the story as a whole. There was promise of a good romantic story with a light twist of suspense but it was all far too rushed and forced together for it to truly work. It was all very bare bones and I feel like the author missed a real opportunity here. The suspense was negligible and the steamy bits weren't even steamy. The book didn't even really touch on other characters and I got no real sense of the setting of the story either. I imagined a story involving a quaint inn but got a surly heroine focused on herself instead.

That being said though I am curious to see what book two has in store for Chelsea and Jeremy because I really did like Jeremy and I don't want to be to quick to judge the author on this one story. I'm not sure why it warrants a series to be made out of it because things wrapped up pretty well for me (in a very hurried sense) and I want to see what may happen with these two. I'm hoping book two is better than this one. I gave this one a two star rating instead of a one because of Jeremy's character, and because there still is a bit of promise if the second book is better written.

I would probably recommend this one to folks looking for a quick short read that they can polish off in an hour or two but it isn't one that I'm going to go out of my way to tell people to read. My advice with this one is to borrow and not buy.