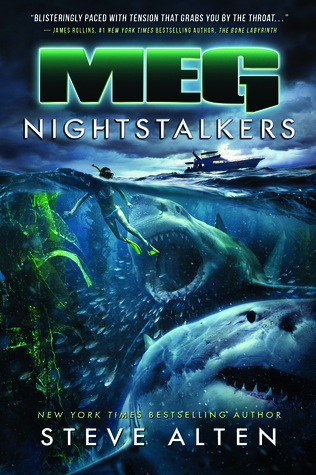 Steve Alten continues the story that began in the New York Times bestselling MEG: A Novel of Deep Terror

In this fifth installment of the New York Times bestselling MEG series, Nighstalkers picks up where MEG: Hell's Aquarium left off. Bela and Lizzy, the dominant Megalodon siblings from Angel's brood, have escaped the Tanaka Institute to roam the Salish Sea in British Columbia. While Jonas Taylor and his friend Mac attempt to either recapture or kill the "sisters," Jonas's son, David, embarks on his own adventure, motivated by revenge. Having witnessed his girlfriend's gruesome death, David has joined a Dubai Prince's ocean expedition, tracking the 120-foot, hundred-ton Liopleurodon that escaped from the Panthalassa Sea. Haunted by night terrors, David repeatedly risks his life to lure the Lio and other prehistoric sea creatures into the fleet's nets, while battling his own suicidal demons.

Steve Alten weaves these storylines together in a page-turning thriller that culminates in a final showdown between the most dangerous predators ever to inhabit the planet.

It's no secret to some of my old blog readers. I love books with monsters, dinosaurs and prehistoric beasts that terrorize humanity. I'd say it's a guilty pleasure but I have no guilt. I love the genre especially this series in particular.

The Meg series is one I've been reading for over a decade. I remember when my brother bought me a copy of what turned out to be the third book in this series, which led to me gobbling up all the other books in this series (and a few of Steve Alten's other titles) over the years. This one, Nightstalkers has been a long time coming. 7 years to be exact and I'm so happy that I was finally able to get my hands on a copy and read it this past week.

This one takes place after the events in Meg: Hell's Aquarium. It's told in shifting points of view mostly from those of David Taylor and his father Jonas Taylor (whom the books started with), however other points of view (from the victims) are also on offer. Plus, Steve Alten continued to write some parts of the book from the perspective of the creature(s) in the book as well. I really love how the author is able to really make me feel as though I am whomever (or whatever) depending on what point of view he's writing from. He truly puts me right there smack dab in the middle of all the blood curdling chaos.

When I started reading Nightstalkers I had only planned to read the first 50 pages, then wouldn't you have it I was 3/4 of the way through and my clock was reading 3 a.m. it well and truly sucked me in.I loved the blood and gore in this one and it had all the heart-pounding action and you know...death that I've come to love and expect from Steve Alten. He gives readers a smorgasbord of prehistoric creatures to choose from as well as lots of foul language and a bit of a natural history lesson about the creatures and their environments thrown in making it a splendid read. He takes the readers on a global pursuit of beasts that have no business being in the 21st century and he does it with flare.

I enjoyed seeing how characters have aged and changed since the 4th book and it was really awesome to see that Mac (Jonas's best friend) is still kicking around. He's always been a favourite side character of mine. I also like how David, again played a bigger role in this series. He grew up with the Megaldon's and cared for them and he has the same fire in his soul that his dad has and I can see where Alten is maybe going in terms of him taking up the family mantle and I think it's great. I can't wait to see where the story goes as the series moves forward.

My only complaints for this one is that it did seem short. I wish that the book had maybe an extra 50 pages because some parts really felt rushed and I wish certain things had been expanded on more than they were hence the 4.5 star rating.

Overall if giant sharks and other prehistoric creatures along with death, deep sea exploration and cussing are your thing I highly suggest giving the Meg series a try.