[Review]* The Unquiet Past by Kelley Armstrong 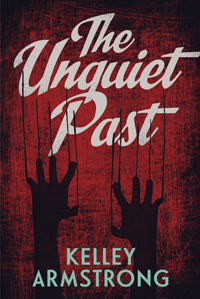 You can only hide from the truth for so long.

Tess has always been tormented by waking visions that make her question her sanity. When the orphanage she lives in burns down, she decides to face her fears and find out once and for all what is wrong with her. She believes the truth must lie with her parents, and so, armed with only an address and phone number, Tess travels to a crumbling mansion in rural Quebec, where she discovers evidence of mistreatment of mental patients. She also makes an unlikely ally and gradually unearths her family’s sad history—and finally accepts the truth about her paranormal powers.
Summary & Cover taken from Goodreads.com
Length: 264 pages (Paperback)
Available Formats: Print/E-book/E-Audiobook/Audiobook CD
Source: Toronto Public Library
Publication Date: September 29th 2015 by Orca Book Publishers


Kelley Armstrong is one of my turn to authors when I'm in a bit of a slump so when I saw that she had released this one last year I had to read it. I didn't get to it until January of this year and it's a shame that it's taken me this long to write the review for it.
I picked this one up because I was in a slump and wanted to read one of her YA titles but wasn't really in the mood to go right into one of her many YA series at the time. The Unquiet Past is set in a series but the series is comprised of each book in it being written by different authors. It was perfect for what I wanted so as soon as I got it from the library I started reading it and wouldn't you know it, I was done the same day. Because of the nature of the book I'm going to have to be a little vague so I don't give any big spoilers away.

The Unquiet Past is different from her other novels in that it's a standalone (she has some but she is a serious series writer). I thought the setting was great, It's set here in Canada (rural Quebec) and in 1964 which is a pretty clear departure from her other stuff, but it was refreshing to see this side of her writing. I wouldn't say that it's clear cut in what genre it fits in but if I best had to describe it it would be a historical young adult mystery with a touch of the paranormal to it. If I had to describe it in one word I'd say gothic.

Tess is a really good character and I liked her right from the beginning. She's spent her whole life in an orphanage in Hope, Ontario and all she wants to do is be free and find out who she really is and why she's being plagued with visions on top of being an orphan. The poor girl really couldn't catch a break. I thought she was really well written, she was smart, witty and a little naive at the same time which made her believable to me. I thought she was quite spunky too and I liked how she was relentless in her pursuit to find out her history, even when it meant travelling alone in rural areas and finding a house (and a curmudgeon of a teenage boy) that held evidence that it used to be a sort of asylum and a wee bit of a ghost/spectre problem.

Then there's the Curmudgeon also known as Jackson a Metis boy who is just a bit older than Tess. He's also looking for answers to something (I'm not telling you what!) and he reluctantly and rudely agrees to help Tess on her quest for answers. I liked him, but I did find his grumbling a bit off putting after awhile. At the same time though he did balance out Tess and her optimism and he brought a levelheadedness to the story and their search so he did play a big role and fill in areas that were needed.

I thought the overall writing of the book was fast paced, and very mysterious. I never knew what was going to happen next and that's what really kept me reading further. There was definitely an air of the paranormal to it that brought a bit of an eerie feeling to the story, especially when they found out what the mansion used to be used for and all that ensued in that strange old place. I thought the way that the author described the scenes was great, I could really see my self standing with Jackson and Tess, watching things unfold in front of my eyes. It was really cool to be able to be transported like that it was almost as if I could smell the smell of old stale house while I was reading it. I loved that about it and the characters were well written.

However that's not to say that the book was perfect. My biggest gripe with it was I felt a bit rushed. I think the characters as good as they were could have been expanded on a bit as well as the story itself. If it were given another 30 to 50 pages to really delve more into the history of the house I'd have like it more. It wasn't a huge detriment to the story but I did feel slightly rushed hence the 3.5 star rating instead of a 4 star rating.

I would recommend this one to fans of Kelley Armstrong, readers who enjoy young adult fiction that is a mix of mystery with a touch of the paranormal and people looking for a read that gives off an eerie vibe when you're reading it. I would advise thought that this is one of the books were things do not wrap themselves up in a pretty bow for you in the end. It leaves you with questions and lets think about the story long after you finish reading it.