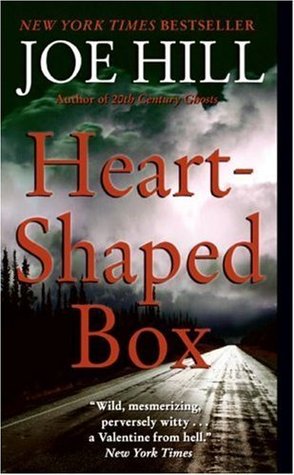 Aging death-metal rock legend Judas Coyne is a collector of the macabre: a cookbook for cannibals...a used hangman's noose...a snuff film. But nothing he possesses is as unique or as dreadful as his latest purchase off the Internet: a one-of-a-kind curiosity that arrives at his door in a black heart-shaped box...a musty dead man's suit still inhabited by the spirit of its late owner. And now everywhere Judas Coyne goes, the old man is there—watching, waiting, dangling a razor blade on a chain from his bony hand.
Summary & Cover taken from Goodreads.com
Length: 366 pages (Paperback)
Available Formats: Print/E-Book/E-Audiobook/Audiobook (CD)
Source: Book I Own
Publication Date:  March 25th 2008 by Harper


Heart-Shaped Box started off very strongly, Joe Hill definitely nailed the creepy chilling aspect of the book. I mean I started this early one morning (4 a.m.) and within a few pages I was struck with the heebie jeebies which persisted until I was 100 page in and decided to call it a night and I did go to bed with an eerie feeling and I felt right at home with that feeling since it reminded me of when I read his YA series. Heart-Shaped Box started off on such a strong note that I was disappointed when I continued reading it that it actually started to lose steam about halfway through.

Gone were the heebie jeebies for the most part and the book just seemed to sort of hit a wall. It slowly began to feel forced as if the author was trying to force the adrenaline filled scenes on me but they just seemed to go from being scenes I was being shown by the author to him telling me the scenes. They lost some of their substance. Things began to feel forced and the character seemed to lose some of their depths as well and became increasingly repetitive and annoying the closer the book came to the end.

I thought Jude was a perfectly flawed character at first and I suppose he's still a good character overall but he just started to irritate me.. He was brash and rude, self centered and self pitying but I really did like him as a character because his personality really fit that whole has been rock star life style all that was fine, but it seemed like too much time was spent focusing on his flaws and less time on the story of the ghost he bought online and how he was going to solve this major problem in his life. I wish he'd been a little more rounded as a character and that he'd been less in his own head and I would have liked more dialogue between him and his girlfriend, Marybeth a.k.a. Georgia.

Marybeth was a good character and i wish she'd been flushed out more. She played a big role in the story and I kind of feel like she was under utilized as a character especially since she was key to helping Jude solve the problem of his murdering ghost that's haunting them. She was brash but in a way that I liked and she had non of Jude's selfishness. I thought she was the real star of the book.

The idea of Jude buying a ghost online was a unique twist to the run of the mill ghost haunting, horror stories out there and i found it refreshing. I also found the mystery behind why he was sent the ghost (SPOILER ALERT (It wasn't by accident)) really interesting because just when I thought I knew why, the story took a delightfully dark twist and surprised me. Craddock (the ghost) was very well written and while I found the parts that were narrated by Jude to slowly lose steam I felt that the actual action sequences when they weren't interrupted by Jude's often annoying thoughts to be great and terrifically spooky and violent and full of bad language.

All in all the writing was quite good. The characters were good, and the scary bits were really well written. There was a true chill in the air while I read this even when I felt that the book was starting to lag. It still kept me reading and I'm glad I finally knocked this one off my TBR list. I thought it was a fresh take on a ghost based horror novel and I did like a bit of the mystery aspect that was woven into it as well. It was flawed however and it just seemed a little too convoluted. Some parts dragged and others weren't fleshed out enough. But over all the chills and thrills were there and it was a good read. Not great but good. I enjoyed it but it's not one I'm going to revisit.

I'd recommend this to those who are already fans of Joe Hill who haven't read this one yet or those that are looking to try him out. While this is my least favourite of his books that I've read, I will be reading him again and look forward to doing it soon. I'd advise going into this one with an open mind and just expecting a good read and not to set the bar to high or low.